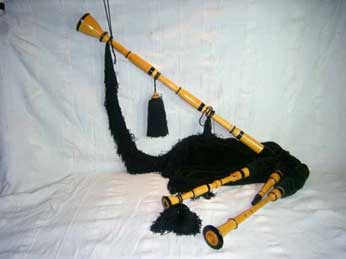 The bagpipes are becoming more and more popular.
Not least because of medieval events and bands establishing themselves in the scene, the bagpipe is becoming more and more popular as a musical instrument that you would like to play yourself.
We offer three different from the wide world of the bagpipes
Primarily the Spanish Gaita, a bagpipe from the north-west of Spain, Galicia the Gaita Gallega, and a variant of it from Catalonia the Gaita de Gemec. We also offer the Weepipe, a quiet variant of the medieval bagpipes, a hummel in terms of volume.
You can already tell: "Bagpipes are not the same as bagpipes"

So let's get a little out on the bagpipe technique:

Usually only the Scottish bagpipes, the great highlandpipe, are known as "the" bagpipes. And then there are the martial "medieval bagpipes" presented by medieval events. From the outside, these have nothing in common with historical models, but are a modern phenomenon.
Traditional bagpipes come in many varieties. Almost every European country and its regions have their own bagpipe style.
There are the Eastern European bagpipes and the Western European. The Eastern Europeans found their way from the Orient via the Black Sea region, Turkey, Greece to the Balkans and further north, the Czech Republic, Bohemia, Poland, the Baltic States to Scandinavia. The Western European bagpipes came through the Moors via North Africa to Spain and moved further north, France, Belgium, Holland and finally to Ireland and Scotland.
That may come as a surprise, but the bagpipes don't come from Scotland but from the Orient, like almost all of our musical instruments.

The Eastern European and Western European bagpipes differ very clearly in the construction of the chanter. In the east, a reed with a reed is used in the chanter, in the west a double reed. This affects the sound of the instruments accordingly.
In addition to the turning work of the pipes, it is also the leather sack that has to be sewn airtight, the valve that has to close properly and, last but not least, the reeds that have to be precisely coordinated. This requires a lot of individual work and difficult setup of the instrument so that it can be played cleanly and smoothly.
Now I don't want to go into the construction of the bagpipes in more detail, but it should be clear that there is already some technology in the instruments. One should keep this in mind if one is amazed at the price of such an instrument.
Nevertheless, bagpipes are always offered at ridiculous prices, mostly Scottish highland pipes. From the outside, these are quite beautiful and solidly made, but the technology does not work. The sack does not hold air, the valve does not close, the reeds do not respond ...
Not an instrument that a novice can handle. You can hang it on the wall, but you rarely get them to play with.
Since word has got around that there are some unusable items on the market with the Scottish bagpipes, the same manufacturers now also have other models (Spanish Gaita, Hümmelchen) in their range, but they are not better either.
Well, anyway, caution should be exercised when buying a bagpipe, and two bad purchases can almost make up for a decent purchase.
We offer traditional Spanish gaitas that we choose ourselves in Spain.
Also the weepipe from a renowned German workshop.
All bagpipes are played through again by us before they are sold and checked for their function.
Thus even the layman can start practicing immediately and should quickly achieve the first successes. 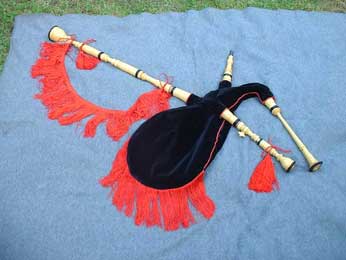 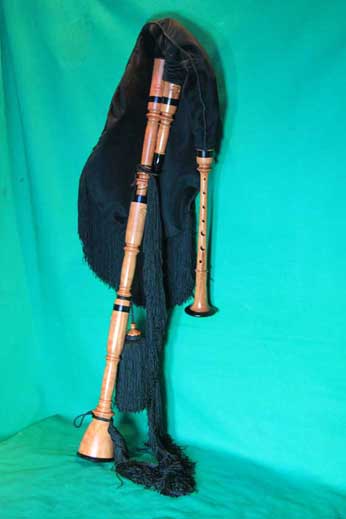 The gaita are bagpipes which are traditionally played in spain. They are mostly made with one Bordun, sometimes with two. The pipes give a loud, relatively warm, pleasing sound.
The instruments we offer have one Bordun, a pipe in Do (C) and a 'goretex' bag covered in velvet in traditional Basque colours. The pipe is played using a wooden reed, and is very easy to master, making these bagpipes ideal for beginners.
We also offer the gaita with two borduns. They are made from strong wood. In case of interest please contact us. fingering chart
Also we are offering only the chanter of the Gaita called punteira. It is to play like a shalmei. 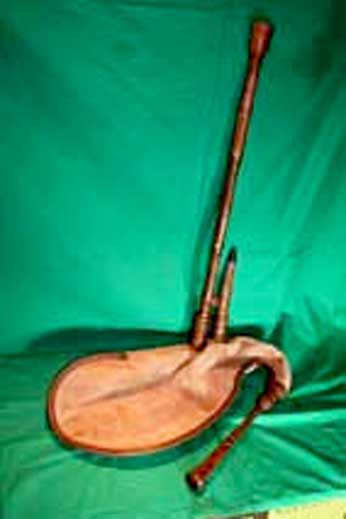 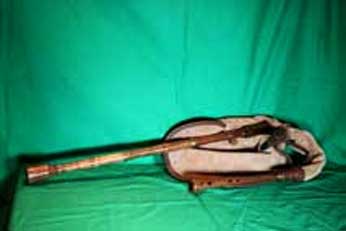 The Gaita de Gemec is made of bubinga and comes with a leather bag. It's in Do (C) and has one drone. The sound is a little stronger than at the Gaita Gallega, and even the pressure to play is a little bit harder. 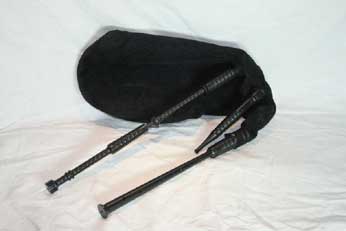 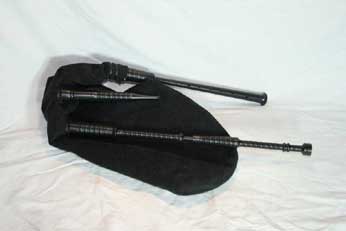 We also offer the "Sackpfeifenfibel", a practice book for this bagpipe. 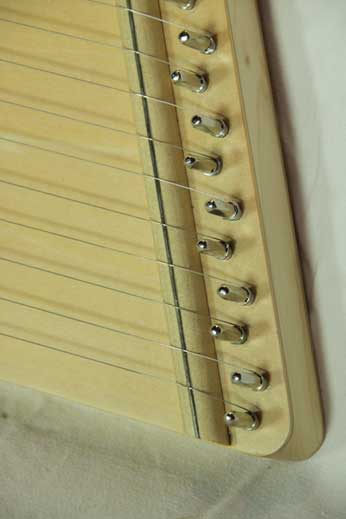 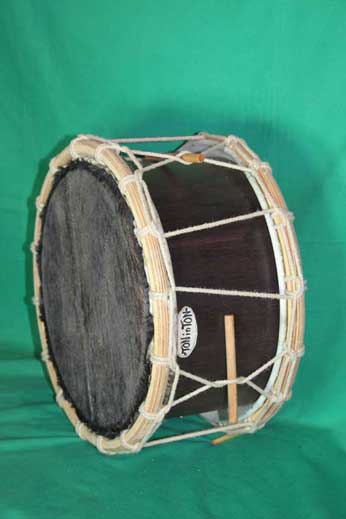 We Davul in different sizes:

The most popular sizes are 48 and 52 cm im diameter.
But other sizes are also available.
The colour is a light wood colour like Teak or dark like walnut.

For the skins are goat skins, calf skin or goat with hair abailable. 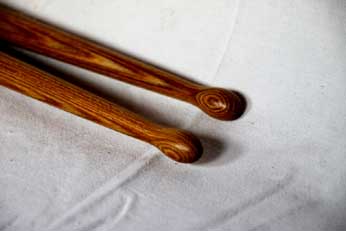 turned thin drumsticks made out of hardwood.

turned thick handled drumstick made out of hardwood.

Made out of a wooden ball and round stick handle, these drumsticks are particularly suitable for children's drums.

Made from specially selected hardwoods (from fruit trees, olivewood etc.) these hard turned drumsticks are availabel in various lengths and shapes.