More videos you can find at our virtual marketstall

Our work with musical instruments began in 1977.

From a friend of mine, I learned how to make clay flutes like ocarina and how to shape them.

With the help of my partner at the time, they also became more musically demanding.

This is where the name Ton in Ton originated.

But it took several years for it to become more.

It was not until the 1990s that the musical skills of my current partner Edith added more flutes, some from my own production but also from other manufacturers.

There are classic wooden flutes, such as the soprano, alto or tenor recorder, the sopranino, the kindergarten flute, plus the pentatonic native Indian flute, the one-hand Tabor flute and the overtone flute.

There are also flutes made of reed in a wide variety of moods, as a recorder or transverse flute.

Later some classical Chinese wind instruments were added, such as the drone flute Hu Lu Si, the Di Zi flute, the Xiao or the Bawu.

In addition to the various flutes, we also offer reed instruments such as the bagpipe, the practice chanter, the punteira or the bombarde.

We also started building drums in the 1990s.

After a while we started working on the Davul, which was continued to maturity at first traditionally and later with separately tunable sides.

We manufacture both versions today.

We included frame drums in our range early on, such as the shaman drum, the Irish bodhran or the ocean drum.

A special feature is the ton in ton frame drum we build. This frame drum can be tuned using screws in a two-part frame. It is covered with natural fur, which is shaved after completion and has a handle made of wild wood.

We can offer a larger selection of mallets for all of these drums.

Since we repeatedly present ourselves with our musical instruments at events, we have expanded our range to include simple instruments that appeal to a wider audience.

This also includes sound instruments made of metal.

We dealt with the different versions of the gong, such as the feng, the Chinese wind gong, the heavier tam tam, the small table gong and finally the sun gong.

Wind chimes and a wide range of bells complete the offer here.

What was missing now are string instruments, which we had to approach a little more slowly at first.

The selection fell on less well-known historical instruments such as the psaltery, the melodyharp, which resembles a kantele, and the Appalachian dulcimer.

There were also plucked instruments such as the ukulele, the mandolin, the larger mandola and the travel guitar, a "normal" guitar with a smaller body.

But it shouldn't stop there.

We are currently working on other wind instruments as well as string instruments that we may soon be able to introduce.

Rather uncommon but similar to the idea of the clay flute, the body of the flute is a hollow bone. Bone flutes have been produced for thousands of years.
Our flutes are made to a large extent from sheep and goat bones. The natural density of each bone produces each flute's unique tone. Rare pieces are made from stag bones. Such pieces are only sometimes available.
Special orders can be taken.

If you want to see and know more about bone-flutes please look at www.knochenfloeten.de 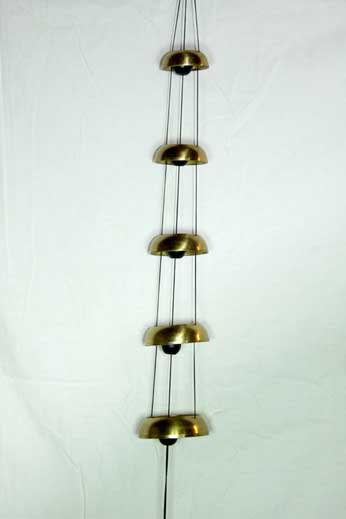 Shells open at the bottom, hung one above the other.
When swinging, balls hit the bowls from the inside and a fine sound is heard.

Like the Tempel Bell trio but with five bowls. 81 cm long. 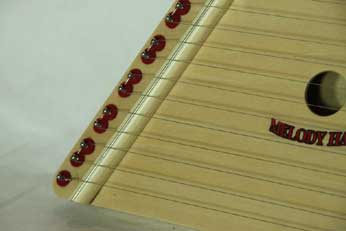